Beth Sherman returned to Rhode Island in 2018 after serving as Rector of St. Francis’, San Francisco for 7 years. In her 14 years in Rhode Island, prior to her time in California, she was Vicar of Christ Church Coventry (now St. Francis), Priest-in-Charge at St. David’s on the Hill in Cranston, and was the Episcopal Chaplain at Brown and RISD. Beth loves to camp, hike, kayak, and read. New York City is one of her homes away from home. Her friends and family bring her great joy. Beth co-owns a yoga studio in Providence, and is an artist who works with photographs, paint, and found objects (organic and human made). In particular, she is fascinated by and drawn to the juxtaposition of nature and industry. 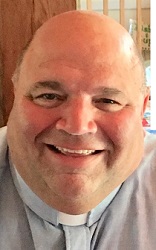 Rob Izzi was ordained a Deacon in June of 2018.  He is an Assistant Offensive Line Coach and Team Chaplain for the University of Rhode Island football team.  As chaplain to the team, he has enabled St. Augustine’s to reach out to football team members, as well as other athletes on campus.  He has a heart for working with young athletes in particular, and young people in general.  He is an indispensable part of the St. A’s clergy team.

Rod plays piano music for all types of functions including wedding receptions and fundraisers. He teaches jazz piano, accompanies vocalists, and performs in solo concerts. Rod has studied improvisation techniques with David Darling and taken jazz studies at Naropa Institute in Boulder, Colorado. He has studied jazz piano privately with Stanley Cowell and Norman Simmons. He is a founding member of the Providence Piano Club.

Susan Stiles was ordained a priest in 1997.  After completing seminary, she trained to be an Interim Rector, and has served continuously in that capacity in parishes in Rhode Island, New York, New Hampshire, and Connecticut, until she retired.  Earlier in her life, she taught English in China, through a program sponsored by the National Episcopal Church.  She landed at St. Augustine’s in 2014, much to the delight of the St. A’s community.  Her rye sense of humor is a delight to one and all!

The Reverend Gail Wheelock, a retired Deacon, assists as needed on our clergy team. St. Augustine’s was her home parish when she was ordained in 1989. During her active ministry years she served liturgically in several South County parishes and worked in homeless shelters, at meal sites, at the Episcopal Conference Center and as a college chaplain.

Gail graduated from St. Lawrence University. She is a member of Phi Beta Kappa. She completed an MA in history at URI and taught in the URI Continuing Education Program for several years. In 1977 Gail became an RN and was employed at Scallop Shell Nursing Home for 25 years.

Gail lives in Jamestown with her husband Richard Ayen. They are avid fans of URI basketball and enjoy a large family, most of whom live in Rhode Island.

Cheryl was born and raised in Rhode Island. After graduating from the University of Rhode Island, she began a career in teaching which would continue for twenty years. After earning a Master’s Degree from Providence College, she worked as a school administrator in Rhode Island and Massachusetts for twenty years until retiring in June 2017. In her spare time, she has always enjoyed reading, cooking and baking. She loves to walk and takes advantage of the many trails and bike paths in RI as an opportunity to appreciate the outdoors. It has been a goal for her to visit each of the states in the US. To date, she has traveled to thirty four.